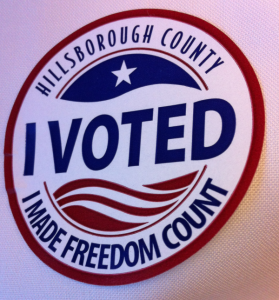 Check your voter status here on the State’s website, including polling place information.

Election results after 7pm in the Central time zone.  (Remember Florida polls close at 7pm in your time zone!)

A federal judge in the Southern District of Florida has enjoined the Florida Elections Commission from enforcing Fla. Stat. 106.08(1)(b)(2), which provides, in part:

“an unemancipated child under the age of 18 years of age may not make a contribution in excess of $100 to any candidate or to any political committee supporting one or more candidates.”

The law was challenged by a then seventeen year old (and represented by the ACLU) who wanted to attend a $150/ticket political fundraiser.

A U.S. Congresswoman from the Third Congressional District in Jacksonville, Florida, has filed suit in Federal District Court challenging the HB1355 changes to early voting passed in 2011.  These changes shortened the number of days of early voting and this law has been put into effect in 62 of Florida’s 67 counties, while litigation continues over the law’s compliance with the Federal Voting Rights Act.  Early voting for the primary election starts on Monday, July 30th in Collier, Hardee, Hendry, Hillsborough & Monroe Counties – the other 62 counties start early voting on August 4th.

Per a Department of State Press release:  “Florida Secretary of State Ken Detzner and the Florida Department of State (DOS) have received a commitment from the U.S. Department of Homeland Security that Florida will be able to access the Systematic Alien Verification for Entitlements Program (SAVE) database.”  You can read the press release on the Secretary’s website.  It is not yet clear how the use of this database will be managed or how information will be provided to the local Supervisors of Elections.  See Letter to Supervisors, courtesy of Dan Smith’s blog.

The ACLU, the National Council of La Raza, and a Florida State Senator have filed an administrative challenge to the rules promulgated by the Secretary of State.  As outlined in prior posts on this blog, Florida presently has two sets of election laws – one set that applies in 62 counties and one set that applies in the 5 other counties (the counties that require federal preclearance for election law changes).  The State Senator’s district crosses county lines and those particular counties presently have different election rules.

Ruling from the bench, numerous media outlets are reporting the Federal judge handing the U.S. Department of Justice’s challenge to Florida’s voter purge and its compliance with the National Voter Registration Act (NVRA) has rejected the DOJ’s request for a restraining order.

The U.S. Department of Justice has filed a lawsuit against the State of Florida and its Secretary of State alleging violations of the National Voter Registration Act of 1993.  The complaint challenges Florida’s recent attempt to systematically purge ineligible voters less than 90 days before a Federal election.  The case was filed in the U.S. District Court for the Northern District of Florida in Tallahassee.

The Civil Rights Division of the U.S. Department of Justice has issued a 5 page response to the Florida Secretary of State.  The DOJ letter focuses on the 90 day “quiet period” in the National Voter Registration Act that prohibits systemic purges and reminds Florida that the Homeland Security database only includes naturalized citizens and not those born in the U.S. and Florida had been on notice for at least eight months that it needed to provide additional detail to use the SAVE database.  The letters ends with “I have authorized the initiation of an enforcement action against Florida in federal court.”

Meanwhile, the Florida Secretary of State announced that the state had filed suit in the  U.S District Court for the Distrait of Columbia.  The suit claims that the Department of State has a statutory right of access to the SAVE (Systemic Alien Verification for Entitlements Program System of Records) database and the Homeland Security department is preventing access.  The e-mails attached to the complaint outline some of the State’s plans for the data – including running a search on all of Florida’s almost 12 million voters (at a cost of at least 50 cents per voter) and then continually running checks on new applicants.  (Documents courtesy of the Miami Herald website.)

Courtesy of the Miami Herald, a federal lawsuit has been filed against the State challenging the voter purge that the DOJ and the Secretary of State have been exchanging letters over.

You can probably guess the tone of this letter by reading its title: “Florida’s Continuing Commitment to Protecting Citizen Voting Rights.”  The Florida Secretary of State disputes the DOJ’s analysis of the National Voter Registration Act and Voting Rights Act, asserts the Homeland Security Dept. is violating federal law, and challenges the DOJ to answer a list of questions.  Coverage from the Miami Herald (thanks for the letter copy) and the Tampa Bay Times.